On Monday 6th June 2011, a female White-throated Robin was trapped on Hartlepool Headland, Cleveland.
This was the third record for Britain and most modern day Birders & Twitchers albeit needed this bird. No way could I make it on the Monday, so keeping my fingers crossed that it would stay overnight, I planned to go straight from work the next day. Sure enough at 18:30hrs, Tuesday 8th June, myself and Barrie were watching the bird in the “Doctor’s Garden” on the headland. Superb views, warm summer sunshine and surprisingly, hardly any birders, 20 if that!!  So we avoided the Mayhem of the Monday and all it’s madness.  I have seen White-throated Robin in Turkey but this was in Britain no less and so my first British Lifer of the year. The bird was reported as a first summer female, displaying overall grey brown upper parts, a flush of  orange-red on the flanks, white under-tail coverts, a white throat, blackish tail often raised in a typical Robin like fashion.
A stunning bird and one that I had not bargained for!!
The bird was always distant for my camera gear but I at least managed a few record shots.
What will my next UK Lifer be I wonder !!
Year List moves on to 213. 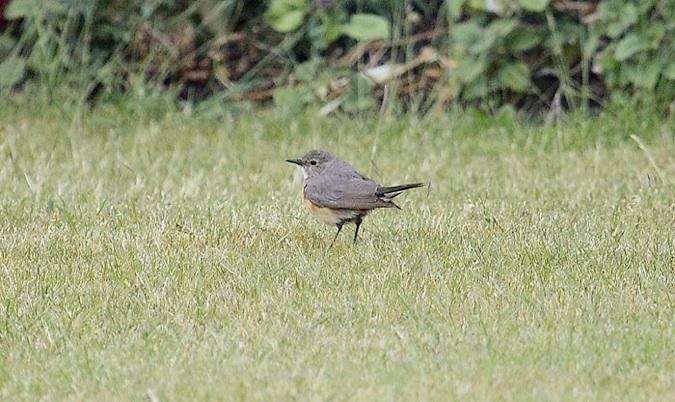 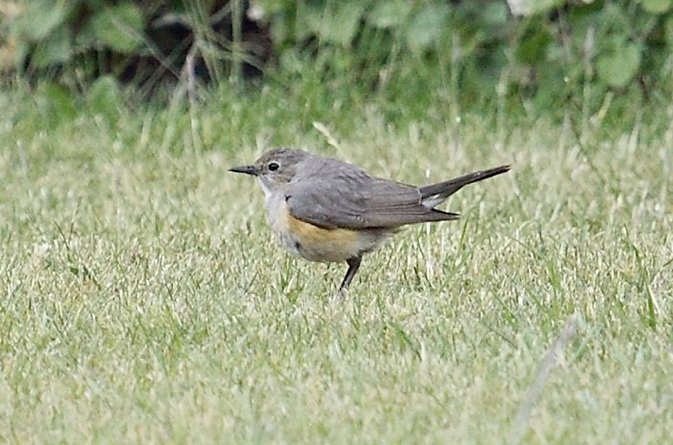 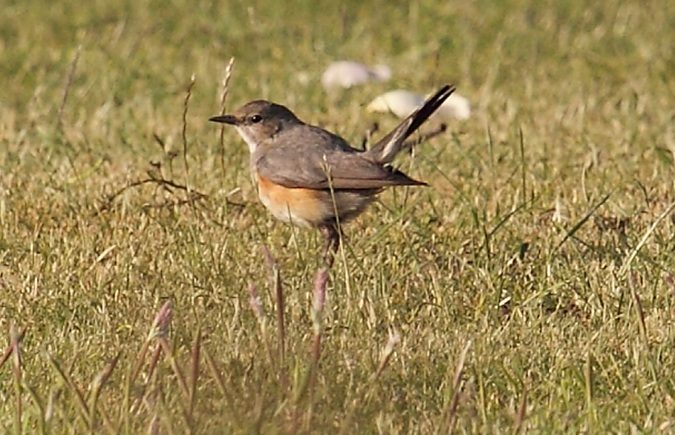 Posted – June 13th 2011 – Whilst developing the above photos, I was surprised to see that the bird seemed to show a blue hue or colour cast to the upper-parts. Surely this type of upper coloration would be more atypical of a first summer male?
This was especially apparent in dull light. You can see the difference in colour cast on the top two photos as apposed to the one above taken in bright sunshine. This caused me to wonder as to whether the bird was in fact a 1st summer male. At this point I merely passed this by as my bad photography or exposure settings on the photos and during processing  on the computer. My images were after all comparatively small due to the distance I was away from the bird.
Having studied a variety of photos on the internet, posted on various websites, I was intrigued to find several photos taken by Mike Lawrence, that showed the same Blue Hue & Colour Cast to the upper-parts. Most photos posted seemed to show a grey-brown colour. Mike has kindly allowed me to post one of his superb photos on my site (see below). I also noted that Lee Evans had made a comment on his blog to his suspicions leaning towards the bird being a first summer male.
Surely, especially as the bird was ringed and would have been controlled in the normal way, then the sex of the bird could/would be determined by the ringers during the in-hand processing of the bird.?
I by no means profess to be an expert on bird biology but I would assume that inspection of first year birds genitalia  can be achieved in the hand?  Therefore determining correct sex & age of this bird?
Any how – Male or female – it was indeed a stunning bird and one which several thousand birders enjoyed. many thanks to the local birders of Hartlepool…………