An ibis species was flushed from Nadin’s flash on the morning of 17th September 2006 by a local birder. However it was unfortunately not confidently identified and was put out on the Pager Network as a possible Glossy Ibis. (Puna Ibis had not been eliminated).

The bird flew off strongly to the North and was not seen again during the day. The finder visited the site at dusk and watched the bird return to roost. On the morning of the 18th, 3 local birders and myself visited the site at 07:45hrs and at 07:50 we had relocated the bird and confirmed the ID as a Glossy Ibis.
The bird was found feeding on the edge of the small flash and very quickly took flight and circled around for several minuted before landing and dropping out of sight onto private land. The bird went missing for the next half an hour or so, despite intensive searching. At around 09:30 the Glossy Ibis was relocated back on the flash and the news was again put out on
the pager networks. The bird eventually departed high to the north at 11am and was seen flying over Burton-on-Trent, Staffordshire at 11:20am.
The main ID features were – The whole foot and part of the leg protruded beyond the tail. In Puna Ibis only the toes project beyond the tail as the legs are shorter on Puna Ibis. Our bird showed a long slender neck and a dark eye. Puna Ibis shows a shorter neck and a red eye, particularly during the breeding season. The Glossy Ibis had very iridescent plumage, often showing green & purplish brown in the sunlight. This was the first modern day record in Derbyshire since 1923.
Thanks go to ©Will Soar for use of the images. 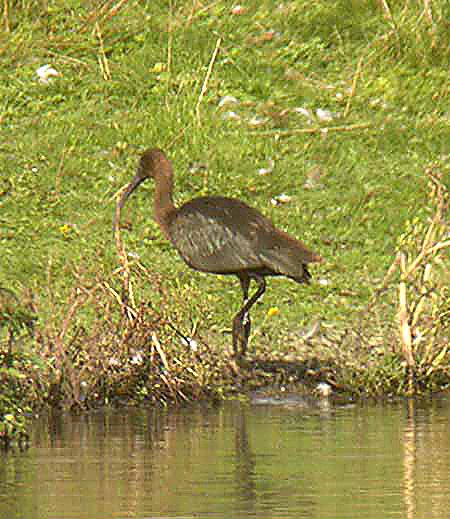