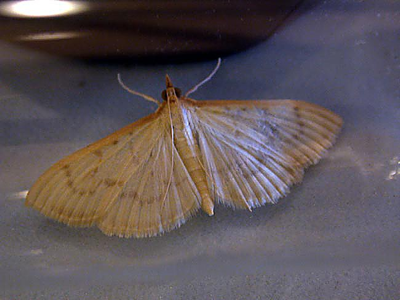 Mick Scott trapped a Pyralid species at Longstone’s, St. Mary’s, Isles of Scilly on 18th October 2006. He initially thought that it was a Grass Webworm species – possibly Herpetogramma centrostrigalis or licarsisalis (1406, 1406a), however the group are notoriously difficult to identify and therefore caution was required as to a positive ID. The species licarsisalis had been recorded in Britain before in 1998 on Tresco, Isles of Scilly (12.10.01) & on the Lizard, Cornwall in October 2004.

The specimen arrived at a time of high migrant moth activity across the islands. I was fortunate to photograph the moth during the day of 19th October 2006. Mick Scott decided to send the specimen off to the Natural History museum for identification due to the doubts on what it was.
On 28th October 2006, I received an email from Dave Grundy, advising that discussions had moved on about the ID of the pyralid sp. Photos were compared with those of the Tresco individual in April 2002 issue of Atropos and also the related species in Goater (British Pyralid Moths) and there was doubts about this specimen being a Grass Webworm. Dave was not happy that the St. Mary’s moth was either of the species and having checked out www.leps.it, there was a photo of Palpita testalis, which look far more promising. Although we were all very cautious, this species did look more likely and so it was now a game of patience, awaiting a confirmation from the British Museum.
On 11th January 2007, I received an email from Mick Scott & a further one from Dave Grundy, confirming that Martin Honey & Mike Shaffer were both happy that the specimen was in fact Palpita testalis (or Hodebertia testalis, depending on which authority is right about the generic name), a FIRST record for Britain of this species.
My thanks go to Mick Scott for trapping the moth and for the opportunity to see & photograph it and also to Dave Grundy for his meticulous analysis of the photos and his advice on his interpretation of this species being testalis before it was positively confirmed. It was very
interesting to be party to the identification process of this individual. 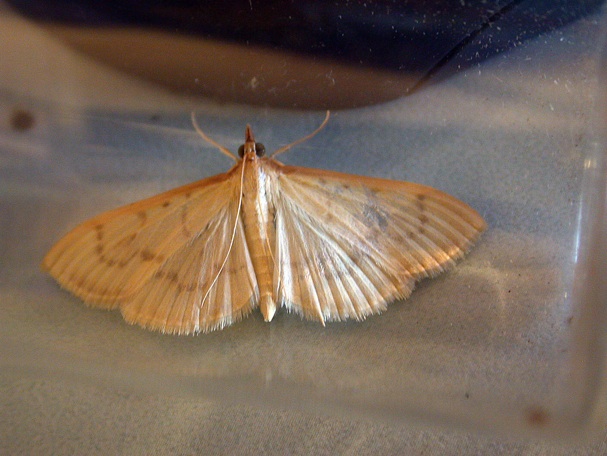