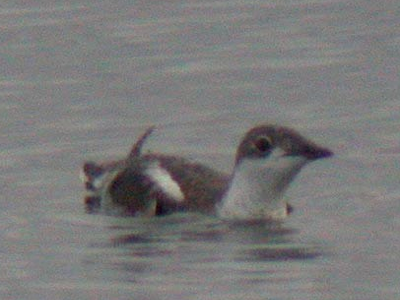 A first record for Britain, what a bird.I doubt if anyone would have predicted this species as a potential addition to the British List?

Photographs of this bird were originally posted to the internet as a Little Auk, on Tuesday 7th November. The bird was subsequently identified from the photos and when the news finally came out, that a Long-billed Murrelet had beens seen off the coast of Devon, 4 days previously, albeit hearts sank! Unbelievably, the bird was relocated on Saturday 11th November and on Sunday 12th November, I witnessed the largest “twitch” for many years. Golden-winged Warbler springs to mind. 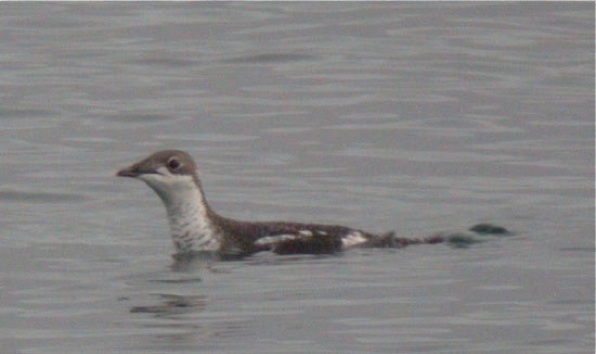 Long-billed Murrelet – Brachyramphus perdix – Dawlish Warren, Devon – 12th November 2004
The species originates from the Pacific Coast of Siberia. Very little is known of this species and precious little is known of it’s breeding biology. Very few nests have ever been found, despite the fact that they occur in thousands on the sea. 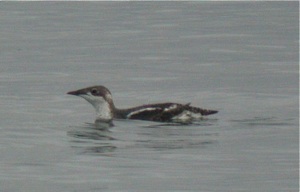 They lay a single egg on a bare branch or on the ground and the nest site is usually located some twenty miles inland. Murrelets seem to have a small life span only living for 2-3 years. Note the distinctive head shape and length of bill compared to other Murrelet species that
show white scapular patches. The bird is in first year/winter plumage. As an adult nonbreeding plumaged bird, it would show an all black nape and would lack the mottling on the lower neck and flanks.The bird shows a distinctive split orbital eye-ring and lacks any sign of a white collar. Long and slender wings, which were fluttered and held sharply back prior to diving. The bird would drift far out to sea, sometimes so far out that it was lost to view. It would then fly close inshore to feed and during this time gave stunning views but was very active and constantly diving. It made digi-scoping very difficult.