Follow me
Photographs were posted on a regular birding forum of what appeared to be an unusual plumaged ficedula “Black & White” Flycatcher. 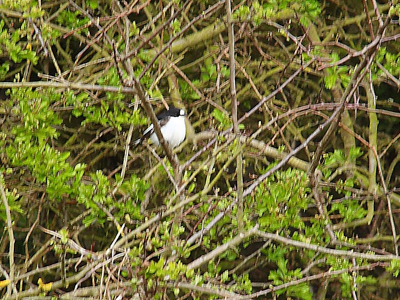 It clearly looked, from the photos posted, that this was not an ordinary Pied Flycatcher f. hypoleuca. More eminent birders than myself were muting that it could be an Atlas Flycatcher (A potential first record for Britain) or a “Hybrid”.  Watching with interest, discussions were leaning towards the bird being a possible Atlas Flycatcher. The Black & White range of ficedula flycatchers are notoriously difficult to identify,especially when they are females, immatures or, as in this case, first summer males. They are known to hybridise and so makes the identification process tricky and sometimes nigh-on impossible. Only DNA Analysis can, in so,e case, be conclusive.
Anyway, I was on site at South Landing, Flamborough Head, East Yorkshire at around 7:15pm last night (Tuesday 1st May 2012) looking at this beautiful little bird. A real stunner and the most impressive Black & White ficedula flycatcher that I have ever seen. I only wished my record shots were good enough to do the bird real justice. There are some stunning shots on the internet, especially on Martin Garner’s website – birdingfrontiers.com. The bird was trapped and ringed on Monday night and a thorough analysis of the birds biometrics were taken.
Meantime what immediately struck me when I first saw the bird were the following:-
1)The large upside-down, solid white, “Heart Shaped” forehead patch. Broad-based and tapering to a point in the middle of the forehead. Reading articles, this seems to be an A1 feature for Atlas Flycatcher.
2)The large white “Wing Patch” and a prominent and extensive amount of white in the tertials.
3)The intense “Velvet Black” of the head and upperparts. In some  light conditions the plumage seemed to show off an Indigo Blue cast.
4)Long wings and primary projection
5)The white wing patch to the base of the primaries.
The white on the bird was really intense and to me seemed more intense than on standard Pied Flycatcher. I certainly have never before seen a Pied Flycatcher showing the features I’ve described here. The wings were dark brown and contrasted with the black & white upper-parts. The rump patch appeared to be a very pale grey-brown. Views of the more intricate parts of the birds plumage were difficult as the bird was some distance. The tail was black and at least two outer tail feathers showed white edges. Difficult to see at long range but could be seen when bird was flitting about in bushes.
Below is the best image I was able to get in the short time I observed the bird.
Before heading off home we stopped off at a stunning Fish & Chip shop  – FISH&CHIPS149 at Marton Road, Bridlington. Fantastic and what a lovely crew of people running it… 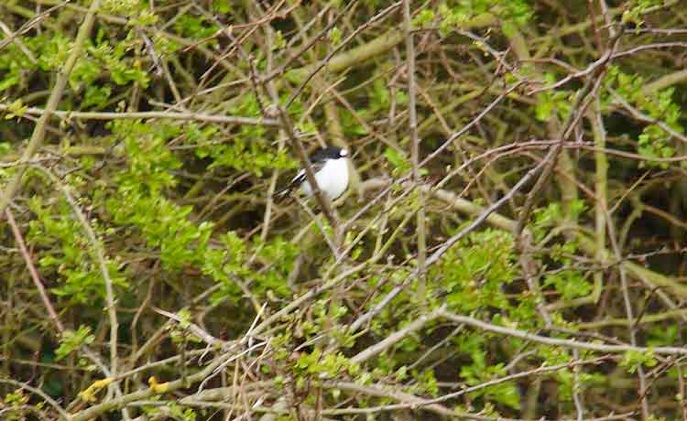 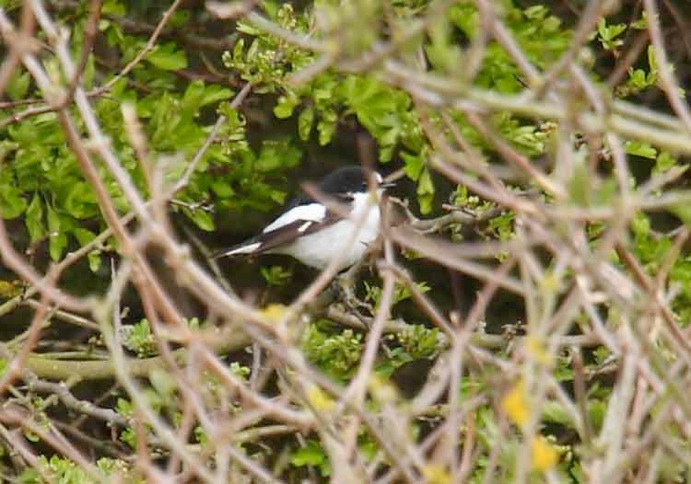