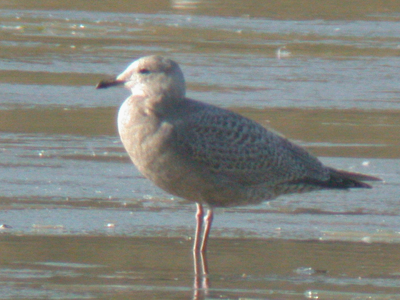 Apologies for the poor quality of these digiscoped images. The bird was at some distance when I was observing it. This gull was previously discovered at Stanton Harcourt Gravel Pit complex, Oxfordshire, during December 2007.
Two local Derbyshire birders then discovered it in the day-time roost at Poolsbrook, Derbyshire on 16th February 2008. The bird was very distinctive in its appearance and so was easily identified as the same bird. A comprehensive article was written on this bird by the original finders and appeared in Birding World Vol 20 No:12 . Despite it showing many features of Thayer’s, there were certain anomalies in the plumage that counted against it being a true Thayer’s. The conclusion was that it must be some sort of “Hybrid”. 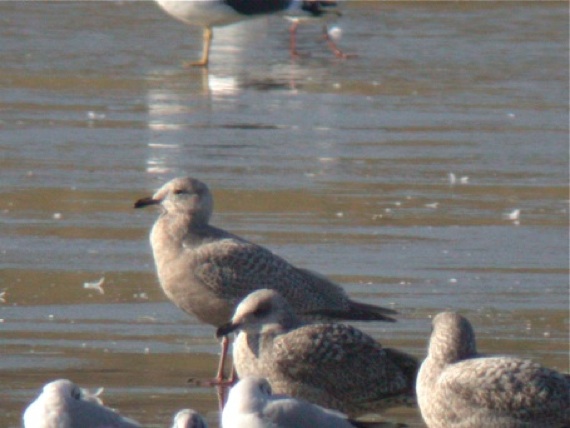 The bird was easy to pick out amongst the large flock of mixed gull species. The overall
typical “Arctic Gull” coloration contrasting with the dark primaries and obvious pale tertials
were distinctive. All the other large juvenile gull species that were on view showed very
dark centres to their tertials. The gull appeared to be the size of Herring Gull, looked small
headed, almost pigeon like and very bulbous and heavy in the chest, breast and belly. 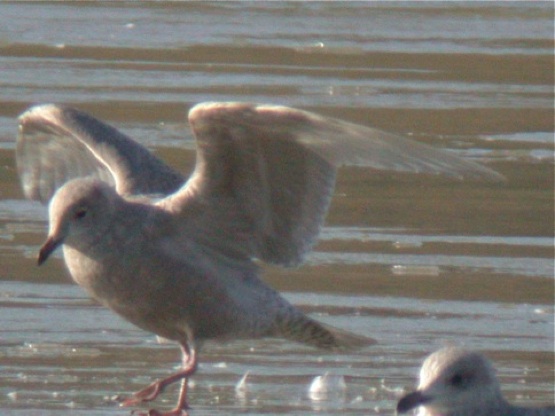 The under-tail was heavily barred and the underwing appeared a silky white. In the image
above the wings look very translucent and much paler than in the folded wing, appearing
more like an Iceland or Glaucous Gull. It seems that the consensus of opinion in this bird
not being a classic Thayer’s, lies in close attention to fine plumage detail. The article in
Birding World states – Anomalies such as milky tertials; marbled greater coverts and “open” scapular pattern, all seem to count against it being a pure Thayer’s, suggesting it is more likely to be some kind of Hybrid, but of what? 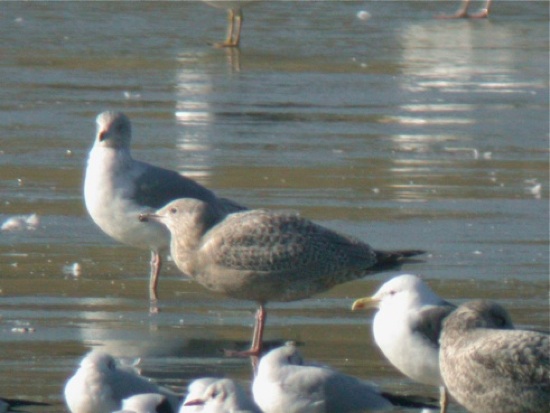 Plumage detail on this scale would not normally be possible had the bird not been found on such easily viewed places (Dix Pit & Poolsbrook). If this bird was found on open water on a large reservoir, I feel it would be extremely difficult to pick it out let alone ID it, more likely it would be overlooked. It just goes to show the great distances that Gulls travel during the winter, which makes gull watching so rewarding.