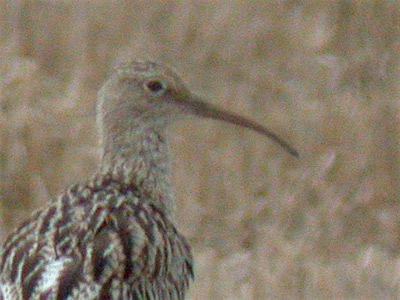 Eurasian Curlew – Possible 1st winter female Slender-billed Curlew – Numenius tenuirostris .
5th October 2010 – Minismere, Eastbridge area, Suffolk.
On 28th September 2004 Brian Small posted two photos on Surfbirds of an interesting looking Curlew species, found on the Minsmere Levels, Suffolk. On 29th
September 2 more photos were posted by Jeff Higgott and by early October, the bird was being considered to be a 1st winter female Slender-billed Curlew!! Even one of Europe’s experts on the species, Didier Vangeluwe had been to see it. The bird was featured on October 1st on a local “Look East” BBC News broadcast and it was
reported as being confirmed as a 1st year Slender-billed Curlew, probably a female.
Despite all this, there were still many experts who had nagging doubts about its identification. I went to see it on 5h October 2004 and the following shows my digiscoped images and my notes on the bird. I like many UK birders have no experience of SBC. Albeit the majority of UK birders who do have knowledge, will be of male birds in Morocco during the mid 1990’s. There are very few people in Europe who will have seen any 1st year females and there are even fewer world records of 1st year birds. So this species is not straight forward to identify and of course the possibility of an odd Eurasian Curlew or Eastern race Curlew – N.a.orientalis or even a hybrid cannot be ruled out. The first accepted British record of Slender-billed Curlew was on 4th  May 1998, when a first summer, probably a female, was discovered at Druridge Bay, Northumberland. It was accepted by the BBRC and firmly identified by field notes and photographs, videos, together with literature and museum skin
identification. See Birding World – Vol 11 – No:5 page 181. 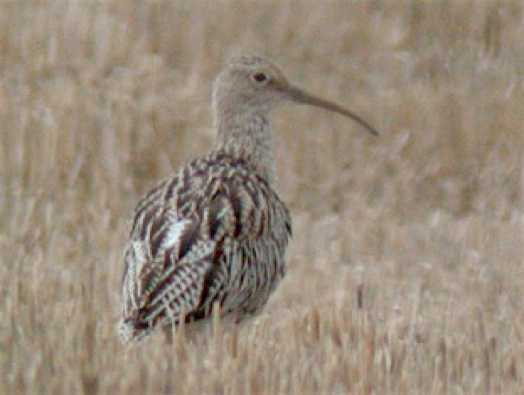 The bird certainly showed a much shorter bill than on Eurasian Curlew (e.Curlew). However note the thick base to the bill. The bill length was  considered to be approx
1.25 times the length of  the head. In flight it certainly appeared thin,  straight and with just a “drooping” tip. At times the bill appeared thicker possibly due to soil and
mud accumulation on it whilst the bird was feeding. I noted the colour as black possibly pale at the base. The bird showed a darkish crown, faintly streaked and this
enhanced the supercilium. There was also a very neat and obvious cream/buff eyering. 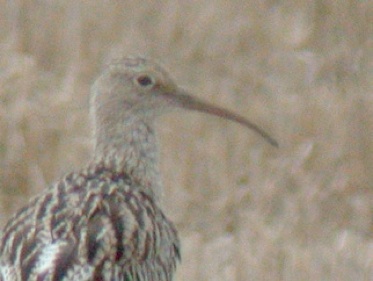 The head and neck were pale brown and in this image contrast well with the darker mantle feathers. At a distance the bird’s bill looked neat and thin however at closer
range it appeared thick and heavy looking. nevertheless it was shorter than any Curlew that I had previously observed during the day (8 individuals). Doesn’t appear
to be very thin at the tip! Also note the extremely white rump feathers showing through the folded wing. The primary tips do not appear to extend beyond the tail. To
me it never appeared “Slight” in build or had any “Delicate” appearance. The neck appeared thick-set and when alerted, it certainly didn’t show any “Jizz Appearance” of Upland Sandpiper. 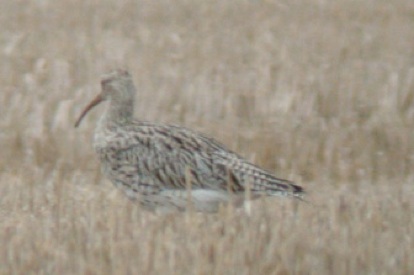 In this image the birds bright white underparts can be seen, however to me it still appeared“Bulky Looking”. It was slightly smaller but not obviously smaller in size to
the 2 E.Curlew it was with. In flight it did look obviously smaller and I found it easy to pick out. It seemed to have a different flight profile, probably due to the shorter bill. I guess that the largest built female Slender-billed Curlew would fit this bird?I could not detect any spotting on the flanks. All  I could see were small “Arrowheads” and “Chevrons”. However it certainly wasn’t so heavily marked as in the E.Curlews. In 1st year S.B.Curlew, according to the literature, there wouldn’t be any “Spots”, just streaking. I couldn’t detect any white on the chin and throat. The neck and breast however were finely streaked darker brown on a pale milky coffee background. This gave the bird a pale necked appearance at a distance and also in flight. 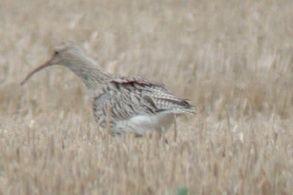 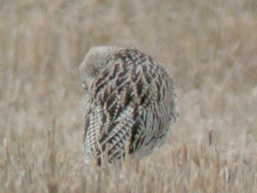 Here the bird is preening and it looks less bulky. The mantle feathers were very dark centred with buffish/ginger fringes. Also note the very pale secondaries showing
through which contrast with the mantle and scapular feathers. In flight the bird appeared very “Frosty” looking and the pale secondaries contrasted prominently with the dark brown primaries, giving the bird a distinctive appearance in flight. It almost had a “Bleached Look” across the upper-wing. I only saw it well in flight once as it
took off out of a stubble field and flew around for about a minute before flying off into the distance and into other fields. 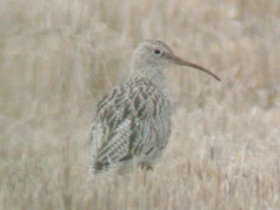 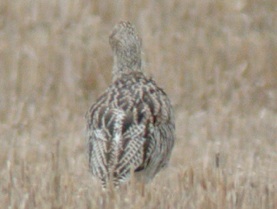 The bird showed pure white underwings and axillaries. I didn’t detect any grey or barred axillaries as in E.Curlew. The rump also appeared white and the tail was whiter that the E.Curlew but appeared to be well barred. I couldn’t honestly say what the leg colour was. Most of the time the bird was feeding in stubble and as can be seen from the photos, the legs were well hidden. I believe they could best be described as pale. The head doesn’t show a “Flatness” to it. In the pictures the bird appears thick necked, yet narrow in the body. 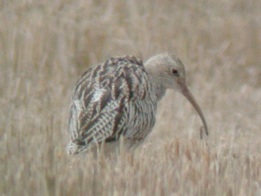 CONCLUSION – If the bird is a Slender-billed Curlew, then it is a large bird at the extreme ends of the size range. It is extremely heavy in build and seems to contradict
all the literature about the species being – delicate, lightly built and diminutive against Eurasian Curlew. My opinions are that it may well be a hybrid I can;t believe it to be a “Bog “ standard Curlew but at the same time I don’t believe it to be a Slender-billed Curlew either.
STOP PRESS – ON 24TH JUNE 2005
– A MESSAGE WAS BROADCAST OVER THE PAGER NETWORKS THAT DNA ANALYSIS HAD CONFIRMED THE BIRD TO BE A EURASIAN CURLEW.