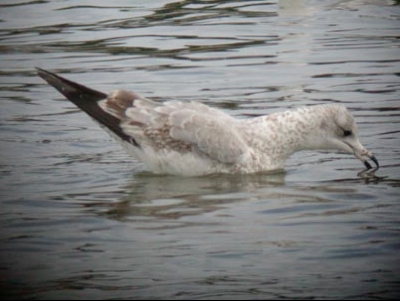 Locality – Porth Killier Bay, St.Agnes, Isles of Scilly.
Age & Sex – 1st winter – possibly a small female.
Observers – TD/RMRJ/RWK/DAN
The following are slightly edited extracts from the rarities report submitted to the Isles of Scilly rarities panel. Also a selection of digi-scoped images taken at the time of finding the bird. Myself and three other birding friends had spent the late morning and early afternoon of the 26th October, on St.Agnes.
Having already seen a Rose-breasted Grosbeak on St.Agnes earlier in the week and a Dusky Warbler being discovered on 25th, St.Agnes seemed a good place to spend our last day. We were wandering back via Porth Killier towards the quay to catch our boat back to St.Mary’s and it was around 4pm that I noticed a medium sized gull flying into Porth Killier Bay accompanied by a small number of Black-headed Gulls. The flock flew
by and I casually called out 1st winter Common Gull. As I watched the bird, I noticed a pale secondary panel in the wing and also noted a tail band but paid little more attention to the bird.
We continued to examine the waders and noted a good variety including, Whimbrel, Grey Plover and Knot. As time was pressing on, we started to walk around the Porth Killier Bay footpath heading towards the quay. It was now about 16:10hrs and our attention was redirected to the “Common Gull” and what attracted our attention even more was a casual comment made by an unknown passing observer and his partner. “Why is the gull amongst the Black-headed Gulls not a Ring-billed Gull”? followed by “I am not sure, as it is sometime since I have seen a 1st winter”.
Ring-billed Gull started to enter my mind, especially as I had previously made comment to myself that the bird had a pale secondary wing panel. We continued to comment amongst ourselves that the bird was indeed  very pale mantled but some felt that the bill was too small and neat for RBG. I made the comment that the bird was
very heavily blotched on the head, nape and neck for Common Gull. The mantle was a very pale grey and that the bird was “long-winged” and didn’t have the gentle expression of a Common Gull. I decided to take a sequence of Digi-scoped images and during this time something disturbed the flock of gulls and they drifted across to the far side of the bay. At this point a comment to the bill pattern reminded us of a first winter Glaucous Gull. Time was now really pressing and we reluctantly left the bird in the bay and promptly marched off to the quay, arriving just in time to catch the last boat back to St.Mary’s. 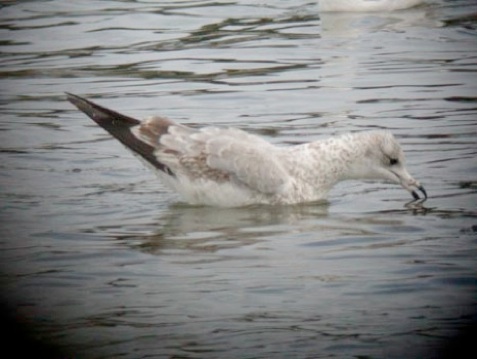 On arrival back at our flat, we began to see many features of 1st winter RBG from my photos – the pale grey mantle colour, especially compared to Black-headed Gull – a heavily blotched head, neck and nape that extended around to the flanks as crescents or chevrons, similar in shape to the markings on the mantle. For me the best feature that stood out were the pale fringes to the tertials,  pale grey mantle clearly showing
white tips to the scapulars and dark sub-terminal crescents or anchors on the mantle – This feature is not normally present on 1st winter Common Gull, which normally show a plain and uniform mantle. 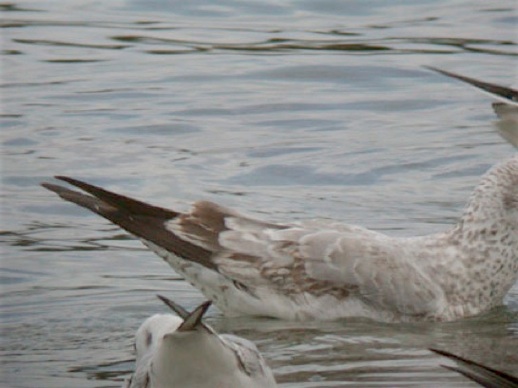 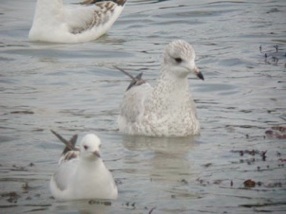 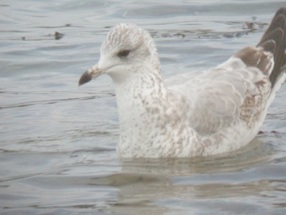 On closer inspection of the photos, the bill appeared to be the right colour. A pinkish base with a good black tip, reminiscent of a 1st winter Glaucous Gull. It also appeared less delicate than in the field. The leg colour was never determined. Due to insufficient reference to RBG, I decided to make a more detailed inspection of the bird once I was back home. Having checked out  “The Gulls of Europe, Asia & North America” and
some other photo material that I had taken of a 2nd winter bird on the Hayle, Cornwall, many years ago, I was even more convinced that our bird was indeed a 1st w RBG.
After seeking further advice from a local Derbyshire birder with whom I consider to be a Gull expert, he commented that many 1st winter Common Gulls could match our individual but the combination of all the features is pretty conclusive to RBG. So I submitted the bird to the rarities committee on the Isles of Scilly as a 1st winter Ringbilled Gull. The record was subsequently accepted and documented in the annual report.
My thanks go to RMRJ/RWK/DAN for their valued help in preparing this article and for their support and help in the identification process.