A week on Madeira to re-charge the batteries and to relax and take things easy for a few days. 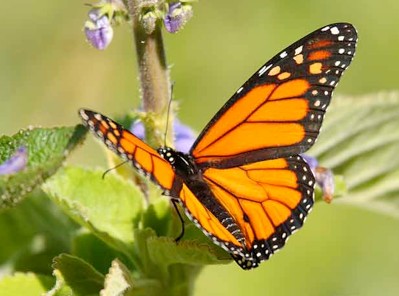 Not so easy when the hotel gardens were full of Monarch Butterflies and two species of Blue Butterflies that were incredibly difficult to photograph. I had also lined up 2 afternoon seabird and Dolphin trips to try and get a couple of sea bird lifers. I had booked the Dolphin trips from the UK through Portugal Sport and Adventure (www.portugal-sport-and-adventure.com) and Alexandra Cleaton was extremely helpful in the organisation process. She also managed to get me on an afternoon trip with Madeira
Wind Birds(www.madeirawindbirds.com) which turned out to be a superb afternoon experience.
So most of my relaxation time was spent chasing round the 12,000m2 botanical garden of the “Quinta” Hotel, which was our base for the week, after Long-tailed Blue, Lang’s Short-tailed Blue and the Monarch butterflies. The two “Blues” were extremely difficult to photograph. The very warm & humid conditions made photography hard work during the day. It took me several days to find the preferred resting sites of the butterflies in the evening sunshine. I eventually sorted things out and was able to
get some reasonable pictures. The Monarchs were very easy but most females were well worn and continually egg laying throughout the week, on almost any plant they could find. It was only the males that were worth photographing.
I am fairly convinced that the Monarchs that reach our shores must be from the archipelagoes of Madeira, the Azores and the Canary Islands. The species is a resident on all these islands but a rare migrant to Western Europe and the United Kingdom, despite the fact that it is so famous for the vast distances it travels each year from North to South America. One thing I have discovered is that the male Monarch has a black spot in the centre of the hindwing, called the “androconium” and it is from
this spot that the pheromones are released. The male is also slightly bigger than the female. The Lang’s Short-tailed Blue is a relatively recent colonist on Madeira. It is a highly migratory species and is fairly common throughout southern europe. The Long-tailed Blue is another long distance migrant butterfly and occasionally turns up in Britain. I am fortunate to have seen both Monarch and Long-tailed Blue in Britain. Both species on the Isles of Scilly. The Lang’s Short-tailed Blue was a new
species of butterfly for me.
I had already visited Madeira some years ago and so the “Land Birds” were not a priority. I did managed to see Plain Swift over the hotel and plenty of Blackcap and Canary in the hotel gardens. Also a family of Kestrels, Madeiran Chaffinch, huge numbers of Yellow-legged Gull at the harbour, a single Roseate Tern, several Common Tern and numerous Blackbirds. On the Sea Bird & Dolphin trips I managed Bulwer’s Petrel ( a new bird), plenty of Cory’s Shearwater including a single flock of c100 birds and several large family “pods” of Atlantic Spotted Dolphin. But alas the Pterodroma Petrels eluded me.
Well there’s an excuse to go back to this magical island some other time.. 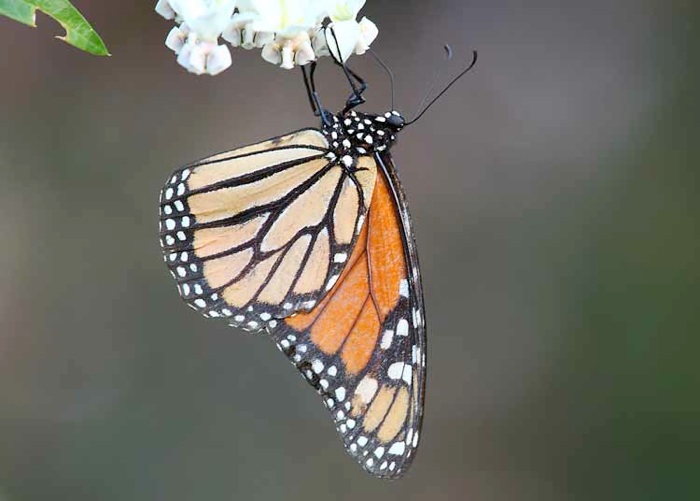 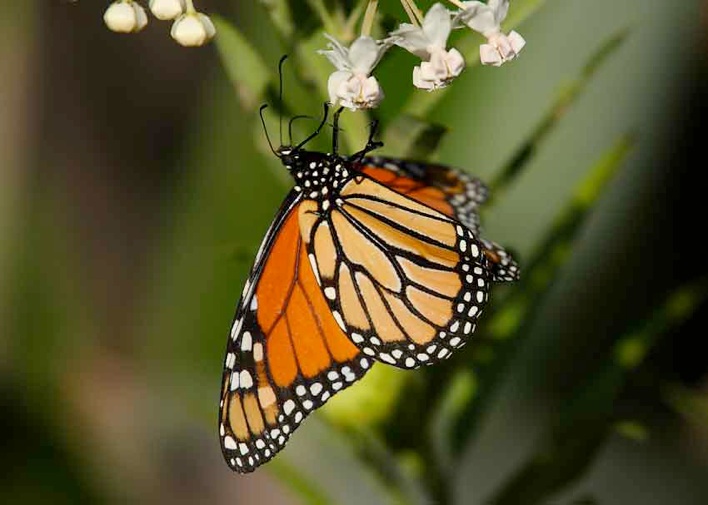 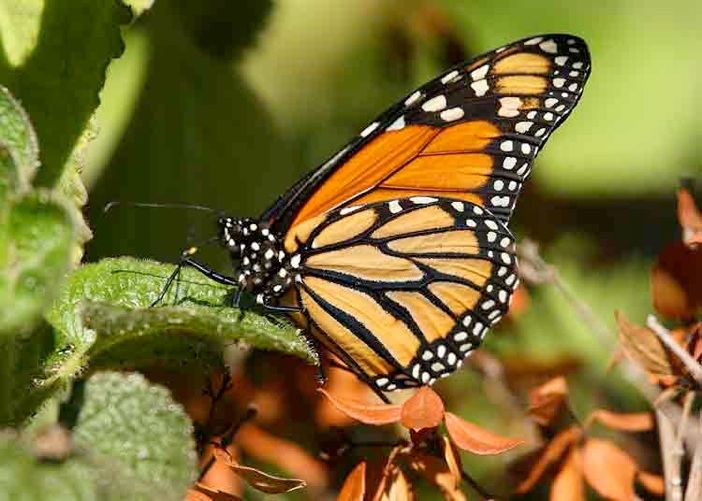 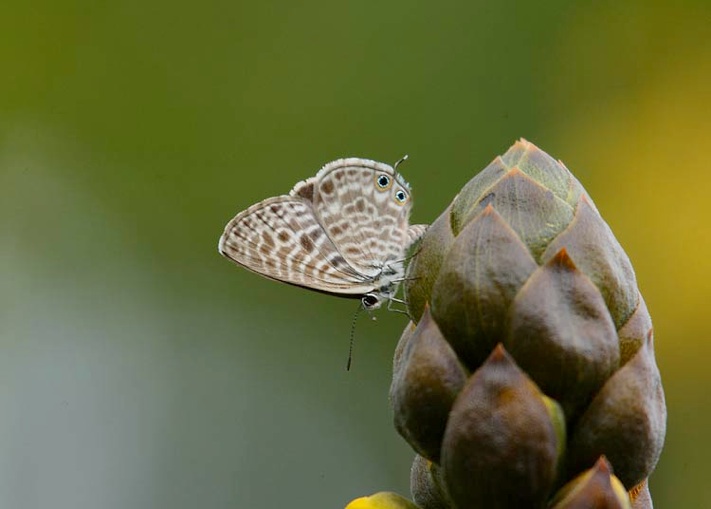 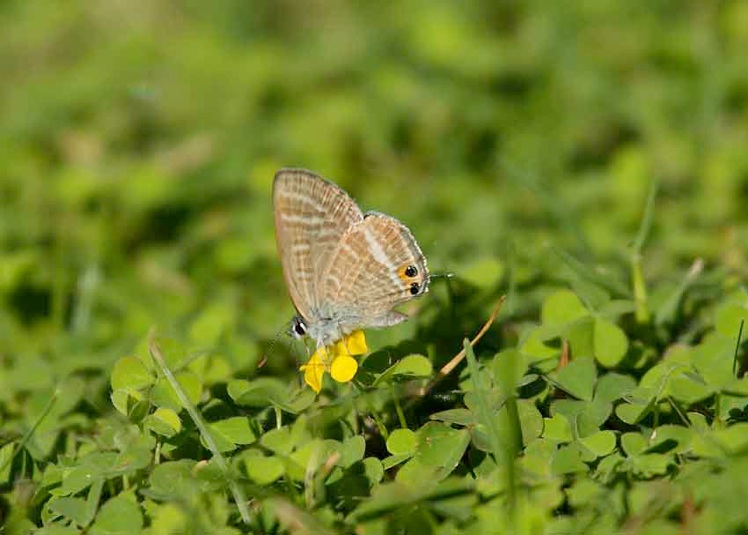 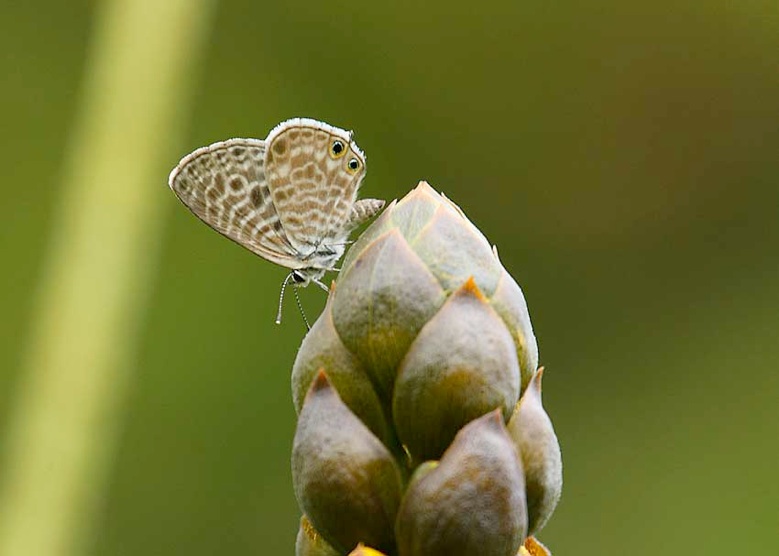 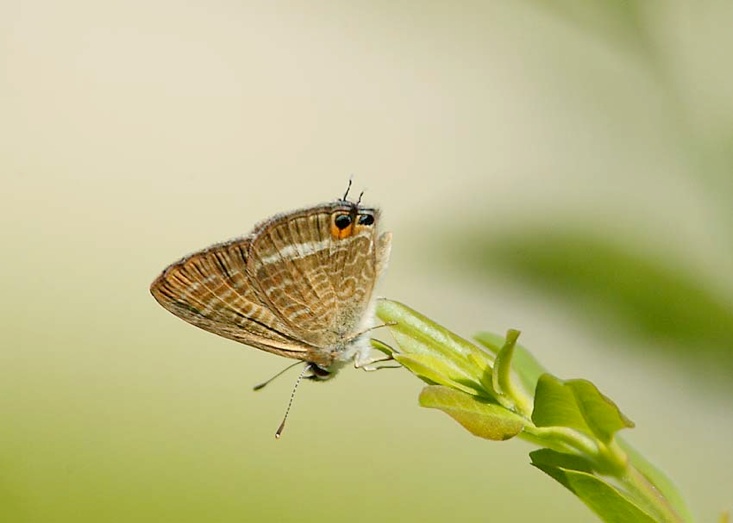 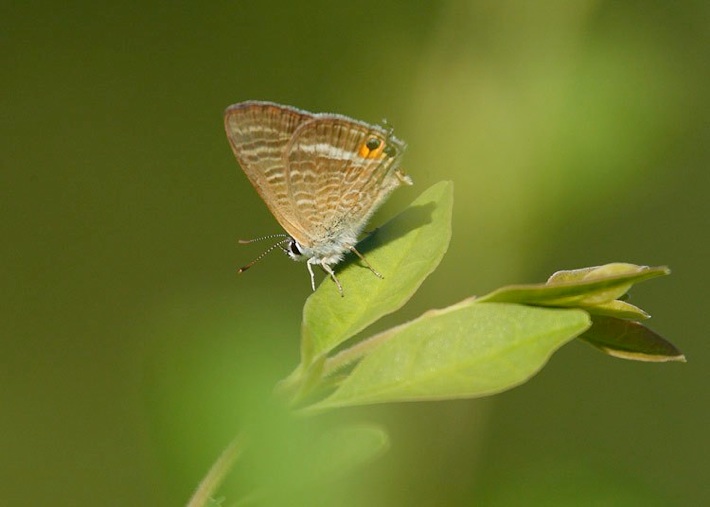 Bulwer's Petrel – At sea off Madeira 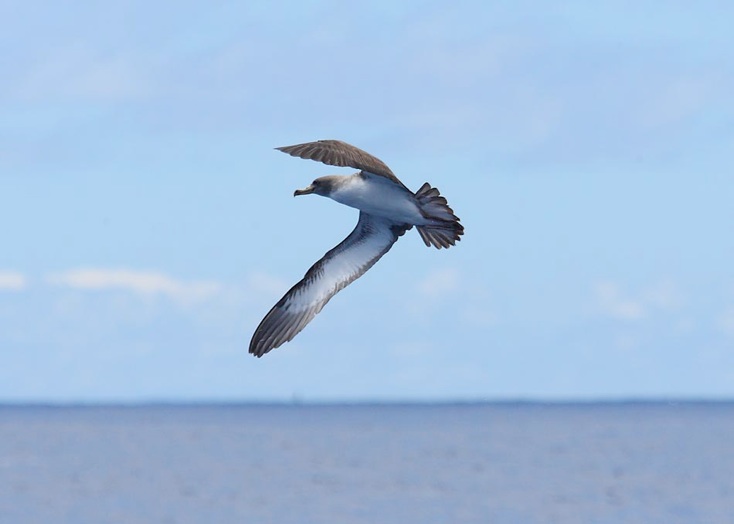 Cory's Shearwater – At sea off Madeira. 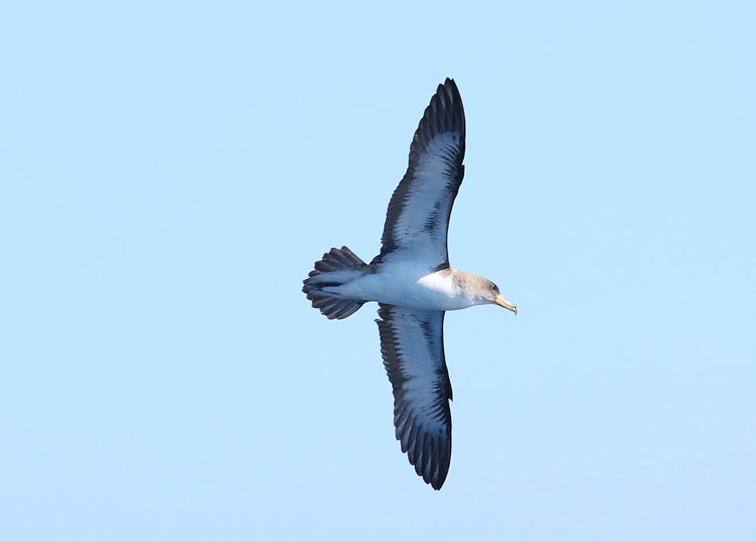 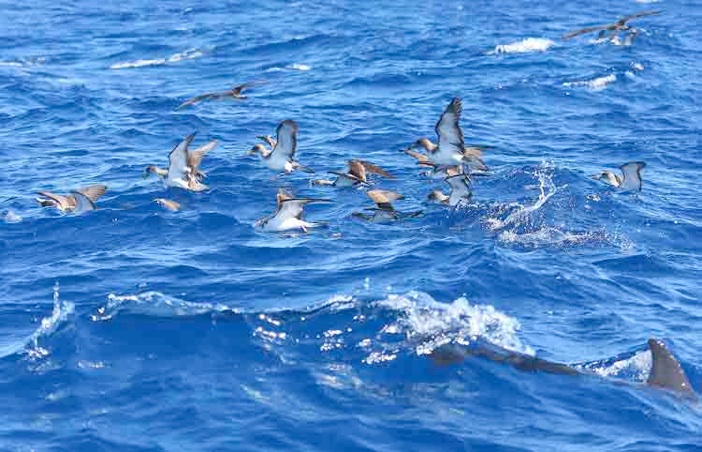 Cory's Shearwaters – At sea off Madeira 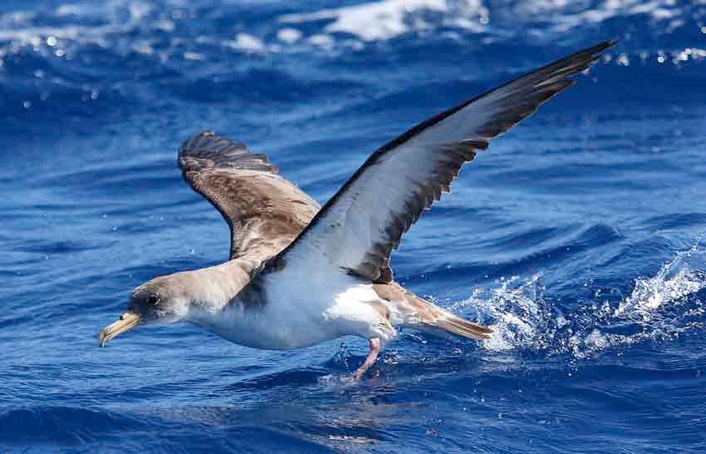 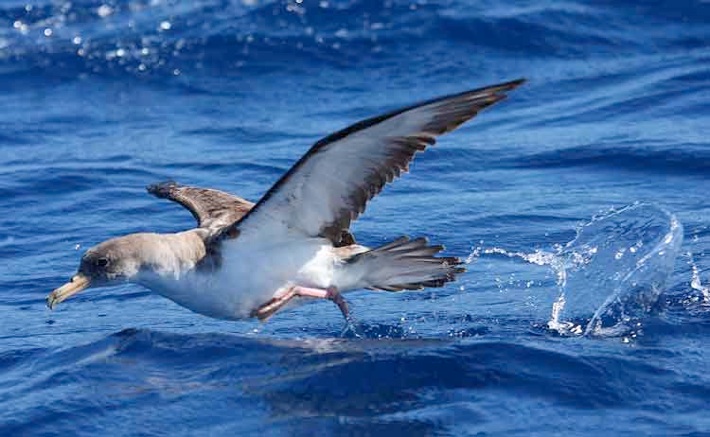 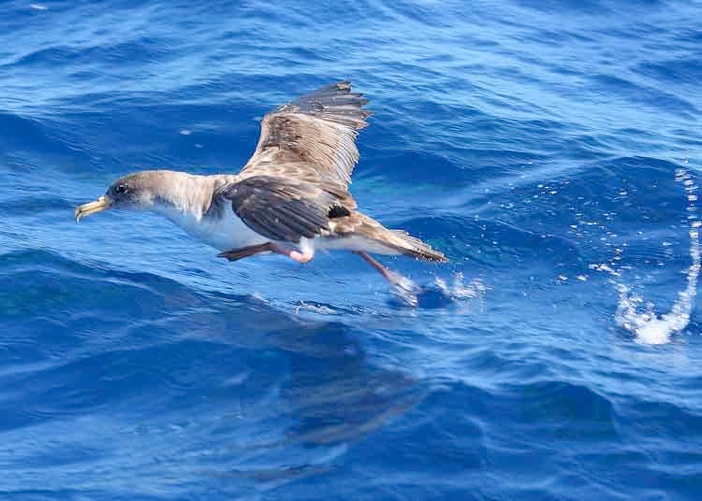 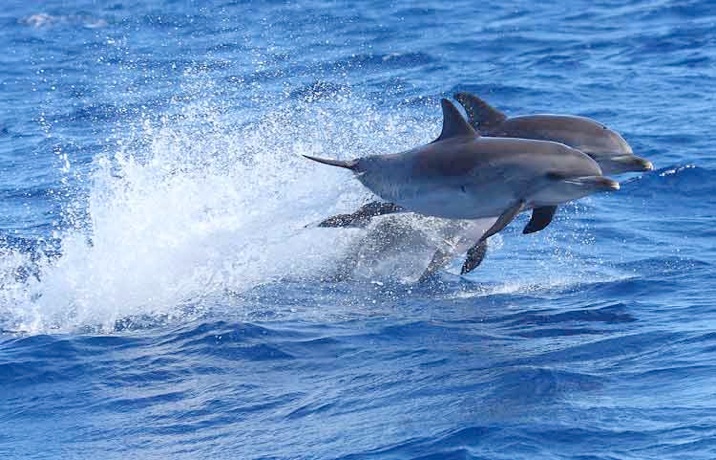 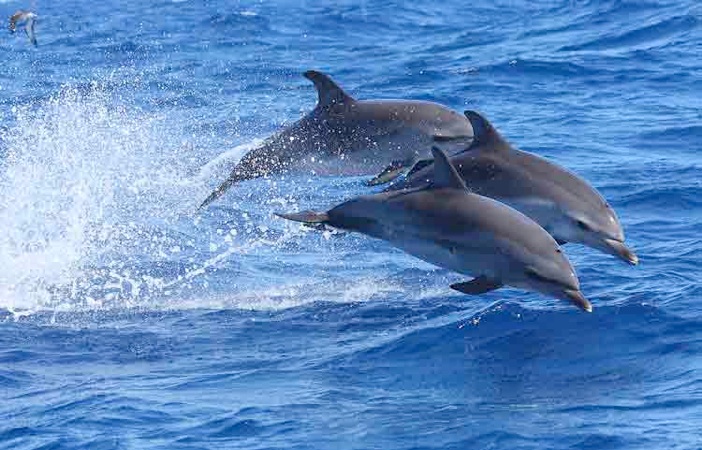 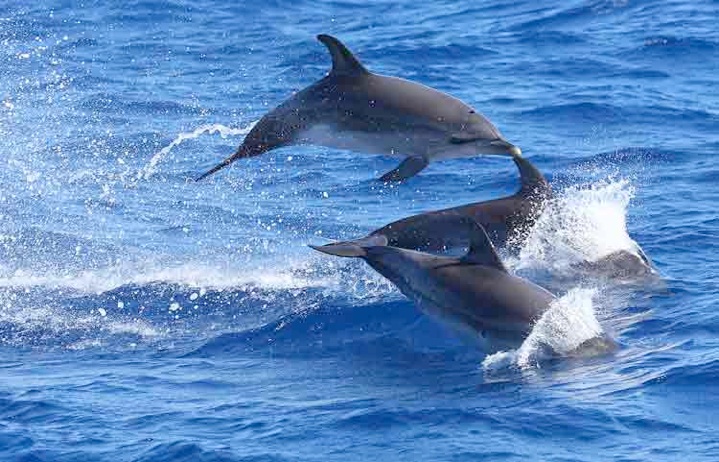 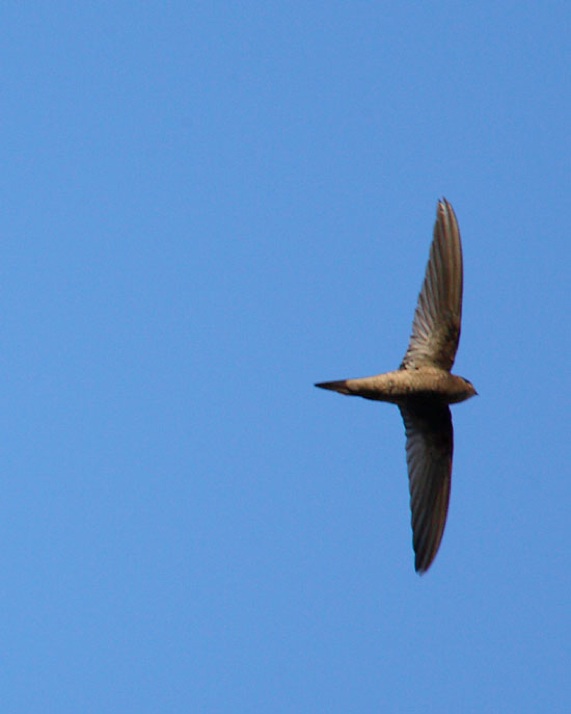