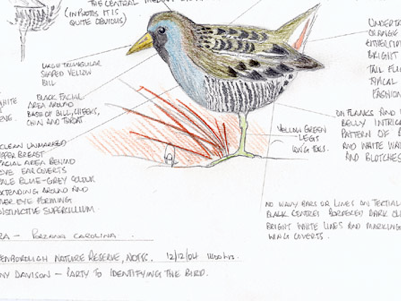 Birding is just an unpredictable experience. We had covered a local patch at Willington, Derbyshire, for not a lot – a few common species of wildfowl. We had then spent nearly 3 hours in a damp hide sitting and patiently waiting for a Bittern, at the Attenborough Reserve, that had regularly been performing in front of the said hide. Cutting our losses, we decided to make our way back to the car park and try for nearby Short-eared Owls. On our stroll back, Richard, Rod, Will and myself met a local birder, Paul Buxton, who was scoped up overlooking a vegetated island on Clifton Pit. To our surprise he had found a small crake, what he thought was a Spotted Crake, we all suddenly came to life!. Once we looked at the bird it was obvious to me that this was no Spotted Crake. It simply had to be a SORA.
We waited for it to show again and needed a couple more views to be absolutely 100% sure. This was a mega bird  and we had to sure. YES it was definitely a SORA and it took a few minutes  for the impact to sink in.
The first record for Nottinghamshire and the Midlands – wow, and about the 15th record for Britain of this North American vagrant crake. A real nice way to end the day. 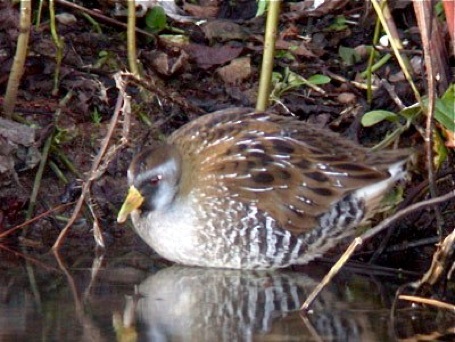 My notes that were sent to the British Birds Rarities Committee read something like as follows:-
At first I thought it was a first year bird, however I am more inclined to think it was an adult in winter plumage. The bird had a yellow-green triangularshaped bill with no visible signs of any red or orange coloration to the bill base. The facial area in front of the eye, around the base of the bill, chin and throat was black. The crown was clean with no streaking and a clean grey neck and upper breast area with no spotting. The grey colour of the neck extended behind the eye and ear coverts and formed a prominent supercillium. There was also a tiny white triangular mark just behind the eye. The fringes of the tertials were silvery white and showed no signs of any “Wavy Bars”. The upper-parts, crown, nape and rear of neck were an olive-brown colour. The mantle had several rows of black “Chevrons” fringed and bordered with “Silvery-white” which formed a “tram-line” effect down the back. the under-tail was distinctive, in having an orange-buff central patch, bordered either side with white. It constantly flicked its tail, in typical crake fashion. The legs were greenish yellow with long toes. Across the flanks there was an intricate pattern of black & white "Wavy lines".
The record was eventually accepted by the BBRC as a Sora.